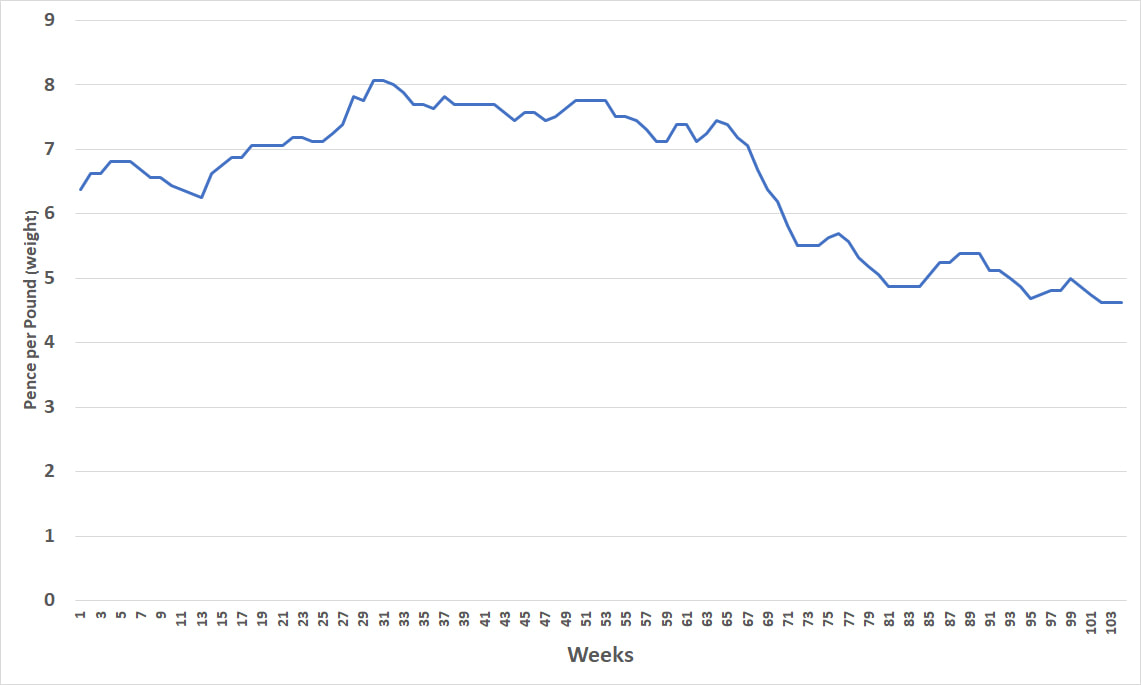 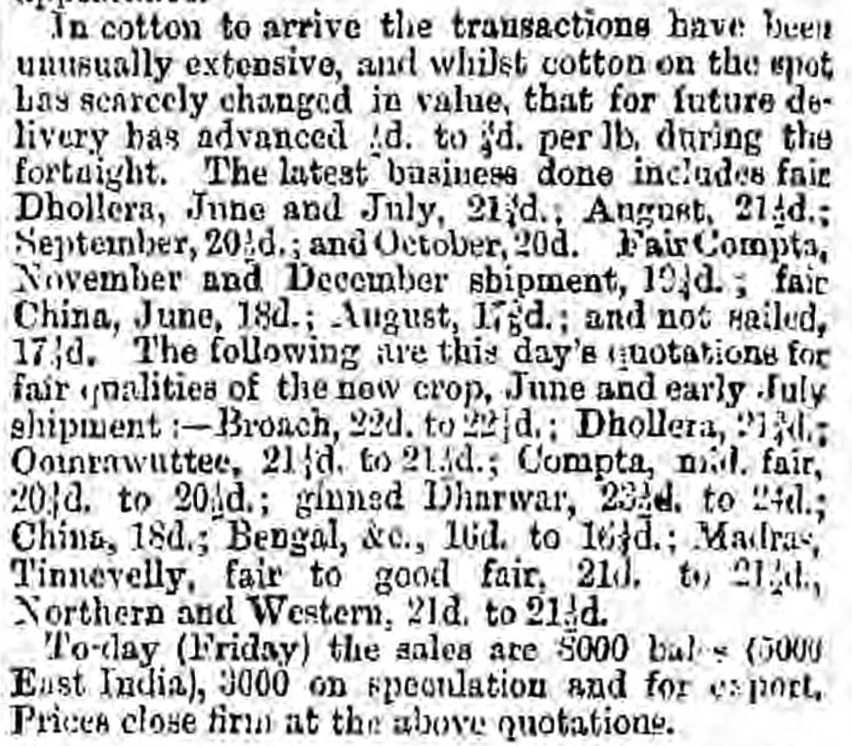 7. The Uses of Liverpool Futures Contracts
The mature Liverpool futures contracts could be employed by members of the cotton trade in differing ways. An importer with stocks of cotton in transit to Liverpool, or stored prior to being sold, would use futures to guard against price falls. If the price of cotton fell, an importer might find that the cotton he owned could only be sold for less than he paid for it. To counter this, the importer would sell futures contracts. In other words, he would sell promises to deliver cotton at some date in the future. If the price of cotton fell, he would be selling his actual stock of cotton at a loss but could buy back his futures contracts for less than he sold them for, hence mitigating the loss on the actual ‘spot’ cotton by a profit on the futures contract.
This process of ‘hedging’ with futures required skill and judgement. If a holder of cotton stocks sold too many futures contracts against his stock, he could wipe out all his profit or even make a loss. Hence, importers might decide to ‘hedge’ only a portion of their holdings with sales of futures. Alternatively, they might sell futures contracts promising delivery at a distant date. These distant date contracts could then be employed to ‘cover’ several cargoes, only being bought back if the price of cotton did fall (Cotton, 17 Sep. 1904, p. 9).
It was not only importers who traded futures. Spinners made considerable use of the market. If a cotton spinner held a large stock of cotton he, like an importer, was exposed to the risk of its value falling if the price of cotton declined. Spinners would therefore cover their stocks by selling futures at Liverpool. The price of spun cotton yarn was closely linked to the price of the raw material. Hence, if a spinner held stocks of unsold yarn, he could also cover a proportion of this by selling futures (Todd, Marketing of Cotton, pp. 76, 109, 111).
If a spinner made a contract to spin yarn he might not be able to find the exact type of raw cotton necessary immediately. By the time it was available, the price of cotton might have risen, so upsetting the calculation he had made when quoting the price of finished yarn to the buyer. To avoid this, the spinner could buy futures at Liverpool the moment he struck a yarn contract, knowing that if the price of cotton did subsequently rise, so pushing up the price of the raw cotton he needed, this would be off set by a rise in the value of the futures contracts he held (Todd, Marketing of Cotton, pp. 76, 109, 111).

Below:
A Liverpool Cotton
Futures Contract Note
(printed in 1912, and
in author's possession) 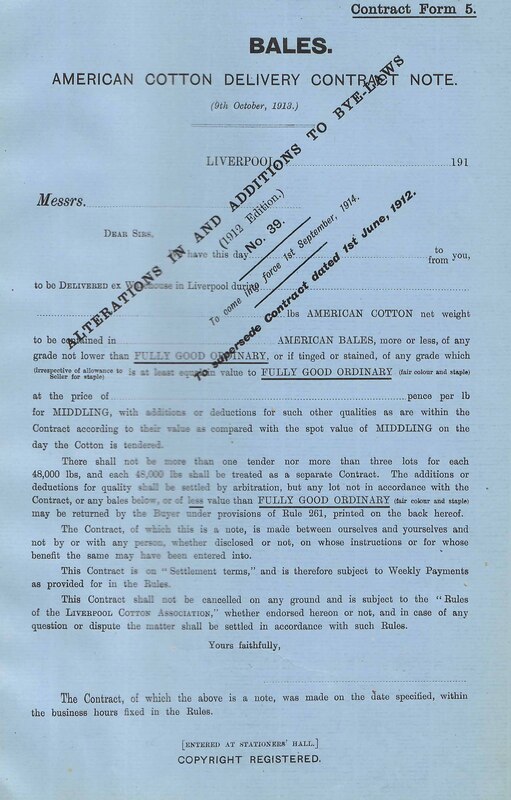 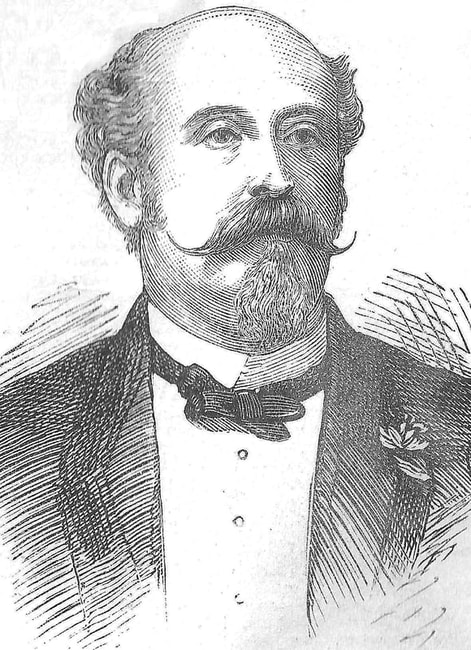 In Liverpool the extremity of the situation was clearly identified as the result of a lack of a margins system and it was reported that, in consequence, support in the market for adopting a margins system similar to that used in New York was gaining ground (see: The Times, 1 Oct. 1881, p. 9; 6 Oct. 1881, p. 4; 31 Oct. 1883, pp. 5, 9; 1 Nov. 1883, p. 10; 2 Nov. 1883, p. 10; 3 Nov. 1883, p. 7; 23 Nov. 1883, p. 7. Liverpool Echo, 28 Oct. 1929). Despite this, opposition still existed among the brokers. Many did not wish to see a possible contraction of the futures market - it should perhaps be noted that one source states that Ranger paid no less than the enormous sum of £330,000 to brokers in Liverpool from September 1878 to his collapse in 1883 (The Times, 23 Nov. 1883, p. 7).
A group of about sixty Liverpool brokers keen to avoid the dangers of the existing situation began a ‘Settlement Association’ for paying margins on a voluntary basis in December 1882, independent of the Liverpool Cotton Association (which had now succeeded the old brokers’ association). Every two weeks a special committee established the ruling price of futures, with cash being transferred between members of the Settlement Association depending upon whether prices for futures had moved in their favour or against them. The Settlement Association ran independently for two years, during which time the practicality of the system was demonstrated. According to one source, members of the Settlement Association attracted more futures business because settlements gave greater security. At the end of this two-year period, the new Liverpool Cotton Association (a body which admitted merchants to full membership and spinners to associate membership)  adopted the scheme officially, but even at this stage the proviso that it was only voluntary remained, although the vast majority used it - no doubt bearing in mind the Ranger episode and the success of the Settlement Association (The Times, 23 Nov. 1883, p. 7. Ellison, Cotton Trade, pp. 294-6. A. Bryce Muir, Cotton Futures: A Collection of Articles on a Technical Subject, (Liverpool: Wood & Sloane Ltd., 1936), pp. 22-3).